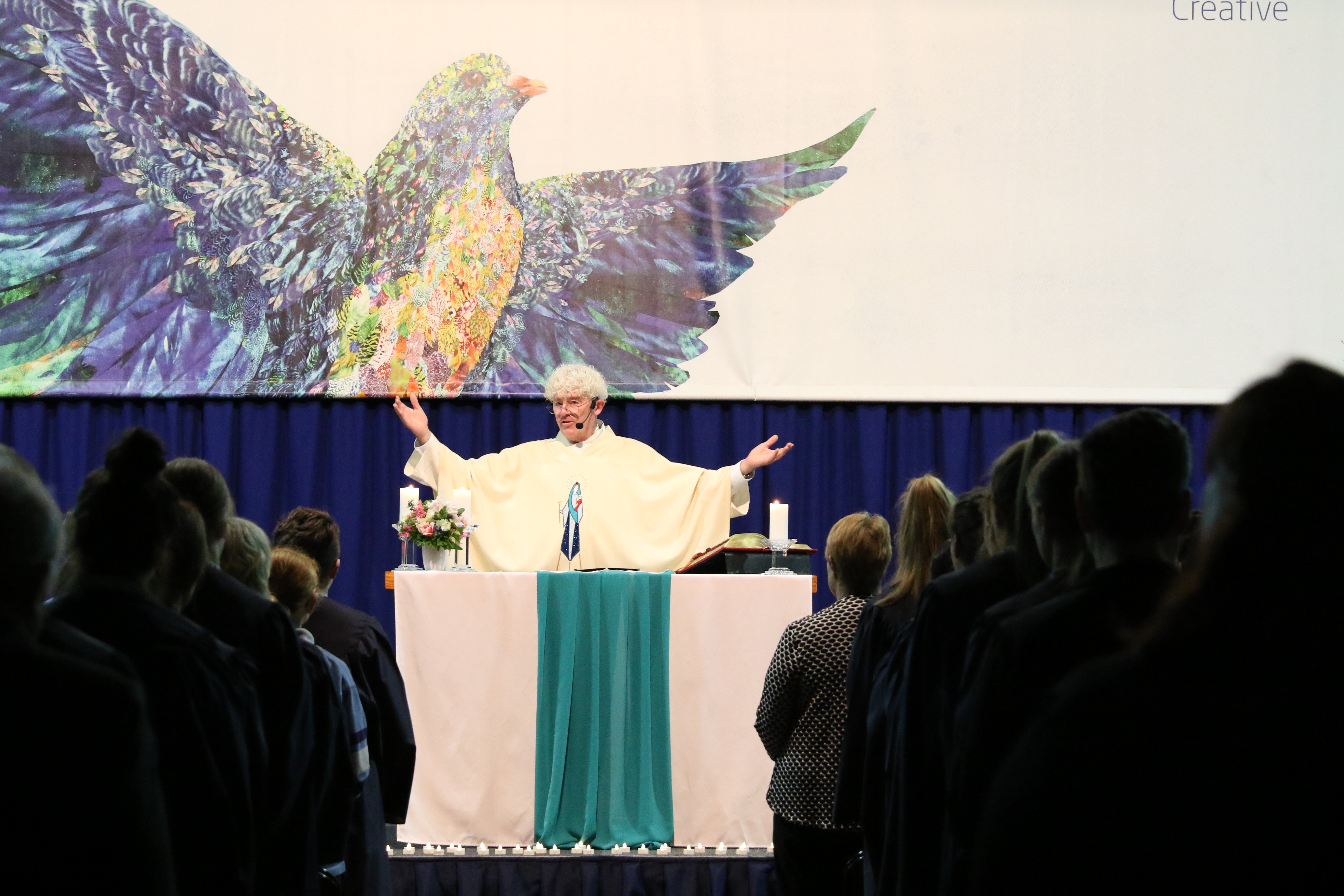 During his homily at the Year 12 Farewell Mass, Fr Chris Ford urged us to recognise that we are “the salt of the earth”. Below is his full presentation.

In the ancient world, salt was extremely valuable because of its remarkable qualities. There is a story that the English word salary derives from the Latin word for salt, sal / salus, because Roman soldiers were paid in salt. This story is probably fanciful, but Roman soldiers were issued salt as part of their compensation. Certainly, the development of various human civilisations has been linked with their access to salt; and was one of the most traded commodities in the ancient world. It was used for both practical and ceremonial purposes; in some ancient cultures as an offering when ratifying an agreement or covenant, in other cultures as funeral offerings.

Because salt was so valuable and important, there have been wars fought over it and taxes imposed on it by governments. It is said that the voyages of Christopher Columbus were financed from salt production in southern Spain, and the oppressive salt tax in France was one of the many causes of the French revolution. Mahatma Gandhi urged fellow protestors to defy the rulers of the British empire by making their own salt to avoid paying tax on it.

Salt has three extraordinary properties, which until recent times have made it astonishingly important for the development of human civilisation: it is a preservative, an antiseptic and a seasoning.

Before the invention of modern refrigeration, salt was pivotal in the preservation of food. From a chemical point of view, salt absorbs water, thus drawing water out of the food … water is vital for all living things, and without water the microbes that cause food to go bad are not able to live, thus preserving the food.

This same property, also means that salt is an antiseptic. In times before modern medicine, salt was one of the few antiseptics used to fight the growth of disease, bacteria and infection. You may even have gargled salty water if you’ve had a sore throat. And so, for thousands of years salt has been used as a healing agent.

Salt, as we all know is also a seasoning. It adds to flavour; it brings out and enhances the natural flavours of beautiful foods.

So, when Jesus says: “You are the salt of the earth,” he’s using an incredibly powerful metaphor to convey an extremely beautiful truth. Firstly, he’s saying: “you are valuable! You are treasured! You are loved!”

Yes, you are salt of the earth. And like salt you are not only valuable, but you are called to be a healer. To disinfect this world of hatred, intolerance, racism, sexism and every other ism that denies other people of their true dignity. You are the salt of the earth, your mission is to be healers, who overcome division and build unity, who bind wounds, soothe broken hearts and bring consolation to those who are wounded and injured by the tragedies and traumas of life.

Again, Pope Francis recently wrote to young people: “through the holiness of the young, the Church can renew her spiritual ardour and her apostolic vigour. The balm of holiness generated by the good lives of so many young people can heal the wounds of the Church and the world, bring us back to that fullness of love to which we have always been called: young saints inspire us to return to our first love.” (Christus Vivit #50). And of all people, you already know this, for at the very core of the spirit of the Good Samaritan is healing … it is already part of who you are.

You are the salt of the earth and as salt is a preservative, keeping things good and wholesome, so are you called to preserve the deepest values of the human spirit, which Jesus himself affirmed: the dignity of all people – ALL PEOPLE, not just those who are like us, not just those we know, not just those we like … yes, to uphold and defend the common dignity of the whole of humanity as sons and daughters of God. And flowing from dignity is justice. If we are all share an equal dignity, if we are all equally loved and valued by God, then justice is also the equal right of every person on the face of the planet. And compassion, another great Samaritan value! And mercy! Forgiveness!!! … perhaps the most distinctly Christian core values. Yes, you are the salt of the earth, called to preserve, defend and promote all that is good and true and beautiful.

You are the salt of the earth, and as salt seasons and adds flavour to food, so you are called to season this world with hope and joy … with peace and love … with goodness and faithfulness … again Pope Francis repeats this message when reminding young people that Jesus rose from the dead, that Jesus is alive! “See Jesus as happy, overflowing with joy. Rejoice with him as a friend who has triumphed. They killed him, the holy one, the just one, the innocent one, but he triumphed in the end. Evil does not have the last word. Nor will it have the last word in your life, for you have a friend who loves you and wants to triumph in you. Your saviour lives.” (Christus Vivit #126). Yes, dear friends, season this world with the joy of the resurrection … season this world with the hope of the resurrection of Jesus … add flavour, add life, add love to this world of our, which we all share.

You are the salt of the earth: you are loved and treasured by God and you are called to make a difference in this world. Here at Mater Christi you have already begun that adventure … to the Year 12 students in particular I say … you are the salt of the earth … yes, never doubt it … Jesus is loves you dearly, for you are the means by with Jesus can spread his light and hope. Yes, Jesus is counting on you … your courage, your boldness and your enthusiasm to season this world with the love of God.